Artek, on the Black Sea coast in Crimea, is the name of the greatest young pioneers’ camp of the former Soviet Union. The camp is situated 20 kilometres from Yalta and is located along the Crimean Range, in a gorgeous crique several kilometres long, whose mild micro-climate and luxuriant vegetation are well known. Founded in the 1920s, originally for a score of youngsters, the camp grew and developped, so that in the 1970s and 80s, it could host as many as 5000 young pioonners at once. The “Republic of Red Scarves” counts more than 150 administrative and housing buildings, has an impressive sports infrastructure (with an olympic stadium, several covered and open-air swimming pools, and a few gymnasiums), a grandiose cultural and educational complex (with several cinemas, numerous libraries, concert hall and even own museum, where a whole part is dedicated to space conquest), and could function in a quasi autarchic manner, since it enjoyed its own port and own electric power plant. In 1945, Artek was given the Order of the Red Banner of Labour. In 1957, it was baptised after V. I.Lenin, and an immense 40m high statue of the bolshevik leader was raised on a 500m long estacade rising above the Black Sea. Artek was the very pride of the Soviet Union as a model camp for young people and was the best proof of its ideological (and hence also financial) investment in the bodies and minds of the most deserving young people. At its height, in all the republics of the former Soviet Union, all the children wanted to go to Artek. 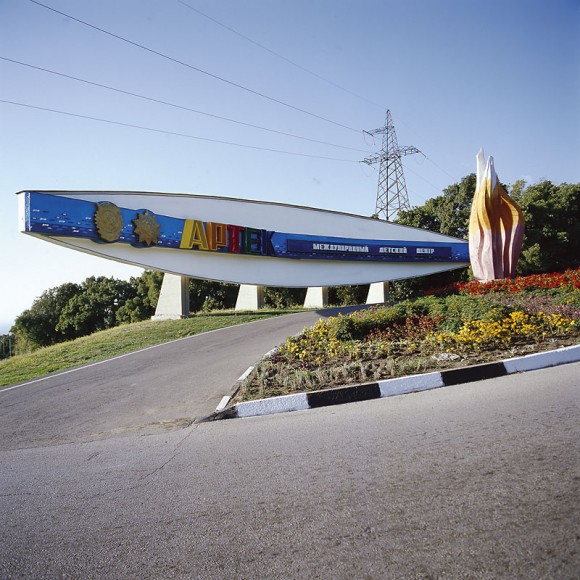