Kunstkamera is a photographic installation consisting in an imaginary collection of photographs, shown in an especially designed hexagonal room, and creating a visual and intellectual game for the viewer.The title, Kunstkamera, refers on the one hand to the “Wunderkammer” and “Kunstkammer” of the Renaissance: cabinets of curiosities and art, typologies of extraordinary exhibits aiming at showing the world in miniature. On the other hand, the Kunstkammers were also paintings representing these very cabinets, where the painter would include hidden meanings only readable by the initiated. The Kunstkamera installation contains both the collection of curiosities, in the form of various photographs, and the photograph representing the collection, thus creating a mise en abyme, with the photograph of the collection inside the collection, which is itself represented in a photograph, and so on. Practically, the installation consists of a hexagonal room, with two entrances opposite each other. The room is thus divided in two: the photographs are symmetrically organised with respect the line created by the two entrances.
Each half room contains two side walls, on which are hanging the photographs of the collection, and a central wall displaying the image representing the room itself. The game begins when the viewer gets acquainted with the photographs, the way they are organised on the walls, and what they represent. As in the “kunstkammer” of old, this one contains all sorts of visual and narrative riddles. The topics of the photographs are the keys to these riddles. On the one hand they refer to tradition of the “kunstkammer”, the very fact of collecting, and the narcissistic obsessions related to it. On the other hand, they refer to my own private obsessions as a photographer: my tendency to create symmetries and repetitions, and to use a creative instrument which I felt prisoner of, which is the idea of series in photography.
The very fact of taking pictures in series is a form of collecting and also an obsession, and Kunstkamera is an attempt to embody this idea of series in photography, and ultimately exceed it. That is the reason why the central photograph representing the collection shows different images than those physically hanging on the walls: these are all series whose subsequent images appear only in the mise en abyme of the central photograph. A final and invisible motif consists in that most of the photographs are hoaxes, either visual (what they show is impossible) or narrative (the description I give them is false). Mystification, through digital manipulation, has indeed become an integral part of photography today, and it seemed necessary to me to include some in Kunstkamera, as ultimate riddles for the viewer to discover. 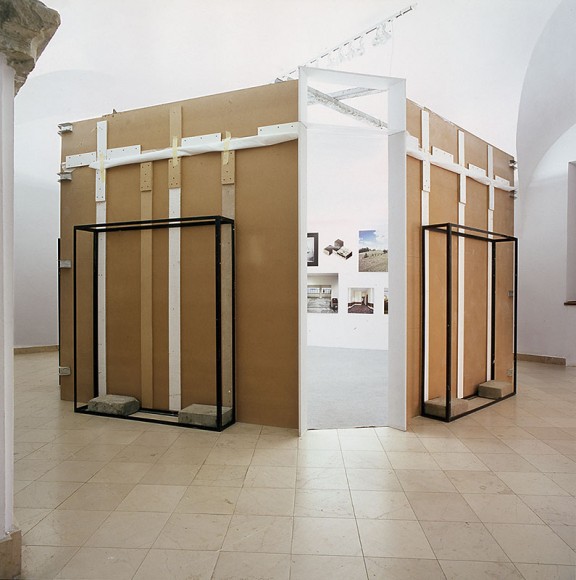 Installation view at the Centre for Contemporary Art, Warsaw, September 2009