The Oval Offices is a photographic enquiry into the life-size replicas of the office of the President of the United States, the Oval Office. There are over 25 replicas of the Oval Office and the number keeps on growing. Each replica is different: some try to recreate the space of a specific president, while the others are more the embodiment of an idea, than the exact representation of the actual room.

In addition to the images, Grospierre has embarked into an in-depth study of the archaeology of the Oval Office, ranging fro the history of the room, to the symbolics of the oval, and the contemporary use of the room by Hollywood, and  whose ultimate goal is to understand the reason for such a proliferation of replicas.

There seems to be an illusion continuum between the replicas: at one end, the Oval Office replicas illusion is simply what we look at (the Hollywood studios). Further down, the illusion consists not only in what we see, but where we are (the Presidential Libraries replicas). At the very end, and in reverse proportion to the replicas’ faithfulness, the illusion impinges on our identities, going as far as to suggest who we are (when pretending to be the President).

“Oval” comes from the Latin word ovum, meaning “egg”. The symbolics associated with an oval room is thus very strong, since the egg evokes the ideas of beginning, life, but also fertility, opulence, copiousness. It is by all means a very heavily connoted shape. From this perspective, it appears quite self-evident why the ancient Greek chose to carve the Omphalos in the shape of an egg. The Omphalos (“navel” in Greek) is a religious stone, supposedly located in the temple of Delphi was to symbolise the centre of the world, its “navel” and throughwhich the Pythia (Oracle) would have a direct communication with the Gods. Equivalents to the Greek Omphalos were found in other religions. In ancient Rome, the Umbilicus urbis Romae (Latin for “the navel of the city of Rome”) is the place which was the symbolic centre of the city, and from which, and to which, all distances were measured. Ancient Rome produced yet another egg-shaped structure, much more famous, and which has now become the architectural symbol of the Antiquity: the Colosseum.

If the oval shape was sometimes used by architects during the Antiquity, it quite literally disappeared for a few centuries, and it is only during the Renaissance that it was used again, most famously again in Rome. Over a century later, Bernini’s design for the colonnade of Saint Peter’s square in the Vatican is also oval in its shape. Many other examples of the use of the oval are also found in baroque palaces. By the middle of the 18th century, the oval shape had regained such popularity that William Hogarth would praise it in his treatise The analysis of beauty (1753). The oval was not only used in architecture, but also in garden designs, most famously in English country houses and palaces. The smooth shape of the oval is definitely welcoming, friendly to the visitor. Furthermore, it is always placed in front of the building, and therefore suggests an open relation between the supposed (temporary) users of the space and those of the palace. At any rate, the oval appears thus to be quite a democratic shape. The acoustics of an oval room has also quite interesting properties, such that anyone standing on a focus point will hear everything that is being said in the room. The armchair of the President is located on one of them.

The United States are famous for their fondness for architectural life size replicas. What is striking in the American replicas is that these buildings are not references, quotations: they are merely copies, pretending to be buildings from another place and time. Jean Baudrillard, as well as Umberto Eco, have both, in different ways, noticed this phenomenon and incorporated it in their analysis of hyperreality. Hyperreality is seen as a condition in which what is real and what is fiction are seamlessly blended together so that there is no clear distinction between where one ends and the other begins.

The rocketing numbers of replicas, striking as it is, is not a neutral phenomenon, especially if one considers their growing number of visitors; it has a range of paradoxical and sometimes contradictory consequences. Time-wise, the consequences seem the most straightforward. This growing impulse to make them indicates a will at accelerating History. Nevertheless, as the replicas are all different, since each show a unique time-based interior design corresponding to a given President, they also stretch time, as all exist simultaneously. Symbolically, the consequences seem the most intricate. The replicas have the paradoxical result of strengthening the prestige of the White House, on the other hand, the multiplication of the replicas may have an adverse effect. If one is to look at the case of works of art, the reproductions of such works has at first the effect of making them known. But above a certain critical point (in terms of number of copies), it seems the reproduction may actually undermine the visual power of the original.

The Oval Office replicas phenomenon has yet another dimension, whose addition to the former analyses may illuminate it fully: the Hollywood connection.  Washington politics has been for a long time a topic that Hollywood has been fond of. Statistically there is an evident parallelism between the increasing numbers of Oval Office replicas and those of movies featuring the Oval Office. The Oval Office replicas participate in this dialectical trend: if the first were initially created to fulfill a function of historic preservation, the currently produced replicas are the cause and the consequence of this demand for presidential entourage. At any rate, it is fair to say that the Oval Office, because of its being permanently shown in the media, because of its continuous presence in Hollywood films, and because of its material proliferation through its many replicas, has undergone a process of complete spectacularisation. It thus seems that the Oval Office has ceased to be a real place, the actual room where the President works, and has in fact become a symbolic set, the theatre of power, quite literally. This spectacularisation implies that it is more important for the Oval Office to be shown as the place where the public/the voters can imagine that power is being exercised, than what actually happens in reality. It might well be that in fact, most important decisions are not taken in the Oval Office, but in a less iconic space. Of course, democracy is the political system where transparency is of paramount importance, where decisions (laws) are being taken in public, usually in a space which looks like an amphitheater (the various parliaments). Therefore it is not completely surprising that the office of the American executive power went through such a process, although the U.S. case is the only one in which such a process went to such extremes.

The relation with spectacle does not end here. As mentioned above, the Colosseum is one of Antiquity’s most famous oval-shaped structures. Comparing the Colosseum's ratio of 0.829 with the Oval Office's ratio of 0.824, it looks as if the creators of the Oval Office had chosen the Colosseum as a model to design the Presidential office, placing it as a symbolic heir to this great and meaningful structure, integrating not only its symbolic background, but also its spectacular properties. In the Roman case, the Emperor was able to rule through the use of spectacle; spectacle being understood as an instrument of power. In the American case, the relationship is analogous, but also reversed: because of the extreme spectacularisation of politics, the President is at the same time an actor in, and the director of the spectacle of politics; power is both the subject and object of its own spectacle. It is a game of reflecting mirrors, whose accurate image is the growth of the perhaps limitless number of replicas of the most famous office space in the world. 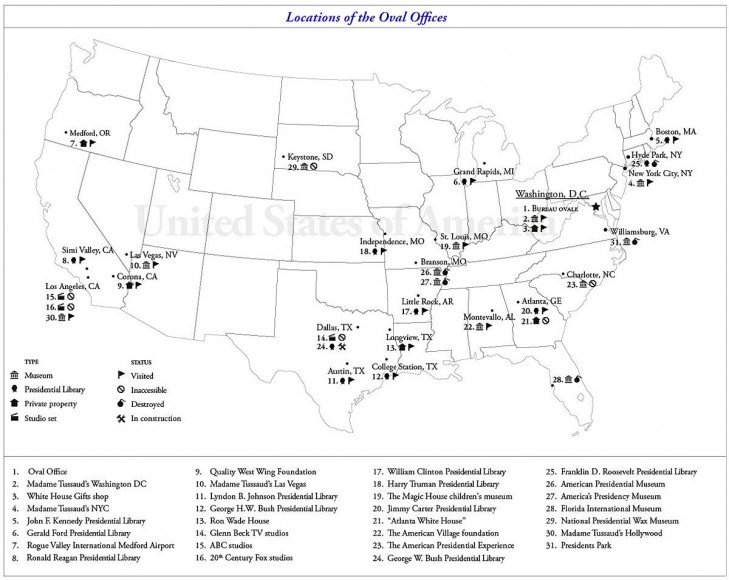 Location of the Oval Office replicas