The picture, which grows

The Picture Which Grows, a project carried out in the apartment of photographer Tadeusz Sumiński is an attempt to confront, in the shape of a photographic installation, the ideas of tidiness and untidiness, the static and the dynamic, order and entropy. It is also a clash of the order informing the archive of Tadeusz Sumiński and a method aiming to disturb this order.

The project’s origins are twofold. Inspired by Italo Calvino’sIf on a winter’s night a traveller, I had long been interested in a certain formal concept for series of photographs, where each successive image in the series would result from the previous one and would even be impossible without it. This could be likened to the growth of a tree, where the leaves can’t grow without branches and the branches without the trunk. In this perspective, we are facing a photograph equipped with an inner growth mechanism which causes it, quite literally, to grow.

In order to apply this idea in practice, I invented the following method: to photograph a room, print the image, hang it in the same room, take a picture again, hang the resulting image, and again and again, until the room would be completely filled with images of itself. Thanks to this method, I do create any new images beyond the original one. All the successive photographs exist potentially in the first one.

I had this formal concept in mind when Karolina Lewandowska asked me to perform a photographic intervention in the archive of Tadeusz Sumiński. Walking around Sumiński’s apartment, I realised that the situation fit my idea perfectly well and would even add extra depth to it. Indeed, the order prevalent throughout the apartment, characteristic for places where archives are kept, would create a wonderful counterpoint for my concept, which in this perspective suddenly started resembling the mechanism of entropy. Achieving The Picture Which Grows in the apartment of Tadeusz Sumiński would be like sowing the seed of entropy in the motionless world of the archives of a late photographer. The order of a photographic archive overcome by photography itself.

Moreover, inspecting Sumiński’s photographic collection, I was fascinated by the particular attention he paid to composition and order in his photographs. This is not quick news photography, but very carefully arranged compositions, at times acquiring a virtually abstract formal quality: geometric figures, checkers, planes, circles. Those are the motifs I saw in Sumiński’s photography. The realisation made me very happy, because I realised that I’d be able to naturally include his arranged photographs in my project. The order of the archives and of the photographs themselves would be confronted with the entropic mechanism I’d trigger off in the very same room where those archives and photographs are kept.

The final result is twofold: an installation in the apartment of Tadeusz Sumiński, comprising his archive and 536 photographs of the apartment, the archive, and my photographs of Sumiński’s photographs mounted on the walls, ceiling, and floor. The second result is, of course, the series of 536 photos itself. From this perspective, the project’s form and content are absolutely intertwined and identical.

The project is open-ended: no conclusion is provided for because it is always possible to take one more photograph and add it to the installation, and so on, ad infinitum. 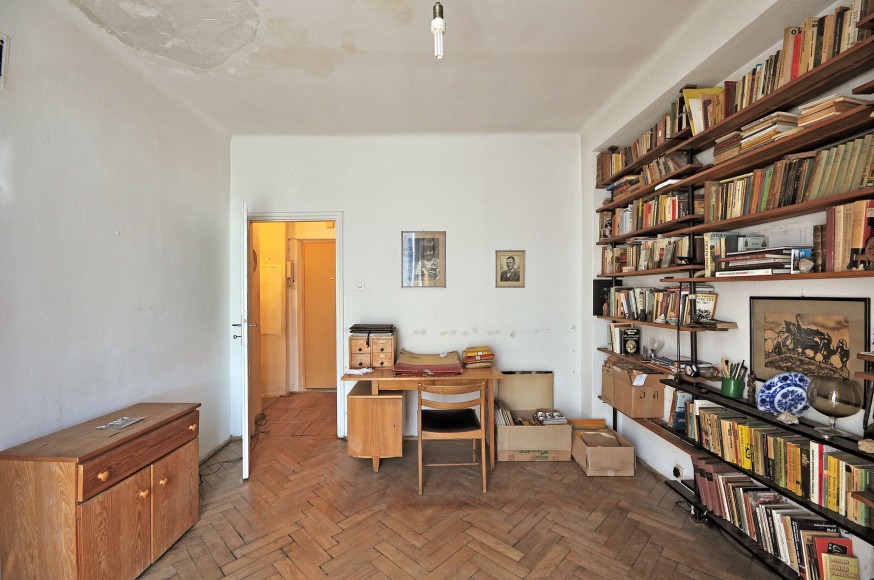 The picture which grows, installation view and shot #1